You are here: Home California

A common belief among tech industry insiders is that Silicon Valley has dominated the internet because much of the worldwide network was designed and built by Americans. Now a growing number of those insiders are worried that proposed export restrictions could short-circuit the pre-eminence of American companies in the next big thing to hit their industry, artificial intelligence.

In November, the Commerce Department released a list of technologies, including artificial intelligence, that are under consideration for new export rules because of their importance to national security. Technology experts worry that blocking the export of A.I. to other countries, or tying it up in red tape, will help A.I. industries flourish in those nations — China, in particular — and compete with American companies.

“The number of cases where exports can be sufficiently controlled are very, very, very small, and the chance of making an error is quite large,” said Jack Clark, head of policy at OpenAI, an artificial intelligence lab in San Francisco. “If this goes wrong, it could do real damage to the A.I. community.”

The export controls are being considered as the United States and China engage in a trade war. The Trump administration has been critical of the way China negotiates deals with American companies, often requiring the transfer of technology to Chinese partners as the cost of doing business in the country. And federal officials are making an aggressive argument that China has stolen American technology through hacking and industrial espionage. 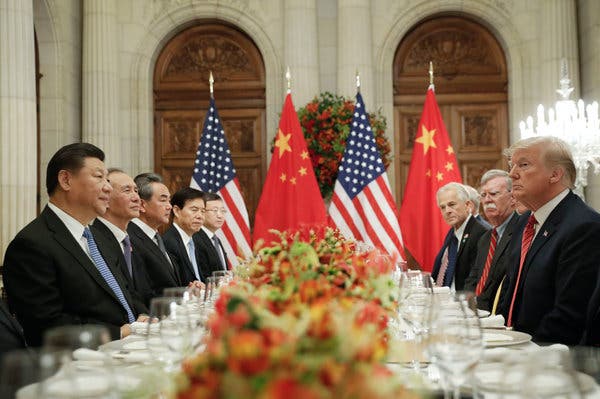 Tech companies, academics and policymakers are calling on the Commerce Department to take a light hand with A.I. export rules ahead of a Jan. 10 deadline for public comment. Their argument has three main points: Restrictions could harm companies in the United States and help international competitors. They could stifle technology improvements. And they may not make much of a difference.

In August, Congress passed the Export Controls Act of 2018, which added export restrictions to “emerging and foundational technologies.” In mid-November, the Commerce Department, tasked with overseeing the restrictions, published a list of technologies for consideration, including several categories of A.I. like computer vision, speech recognition and natural language understanding.

The restrictions would affect the export of technology to certain countries. Though it does not specify which ones, the Commerce Department proposal points to countries that have faced trade and arms embargoes in the past. Those include China, Russia and Iran.

The Commerce Department declined to comment on the proposed restrictions. After taking public comments, the department will draft a formal plan. It could result in anything from new licensing rules for A.I. exports to outright bans.

Artificial intelligence could be as vital to the tech industry as the World Wide Web was 25 years ago.

It is easy to forget that before the mid-1990s, the tech industry in the United States was in a slump and the consumer electronics giants of Japan looked unbeatable. That changed as Silicon Valley companies popularized innovations like the web browser and e-commerce. Today, the likes of Google, Apple and Facebook dominate tech all over the world.

But American dominion in artificial intelligence is far from guaranteed. China is investing billions in A.I. for both commercial and military use. And the expertise that has flooded to Silicon Valley over the years is starting to stay home, partly because of immigration restrictions. Centers for A.I. research are popping up all over the world, from Toronto to Cambridge, England, and Beijing.

Enforcing export controls on artificial intelligence would present an unusual challenge for regulators.

A.I. is something policymakers call a dual-use technology. It has innocuous commercial applications, like helping to steer your car or ask your phone a question. It also has important military uses, like helping a weaponized drone find its targets.

Defense planners believe A.I. represents the next notable change in military weapons, akin to the tactical targeting of so-called smart bombs a generation ago or nuclear weapons before that. A.I. can also aid surveillance systems and even disinformation campaigns through software that can produce fake photos and videos.

But “trying to draw a line between what is military and what is commercial is exceedingly difficult,” said R. David Edelman, a technology policy researcher at the Massachusetts Institute of Technology. “It may be impossible.”

It is difficult to put a “made in America” label on artificial intelligence. Research on the technology is often done collaboratively by scientists and engineers all over the world.

Companies rarely hold on to the details of their A.I. work, as if it were a secret recipe. Instead, they share what they learn, in hopes that other researchers can build on it. One company’s “breakthrough” is often the latest iteration of what many researchers at private companies and universities have been working on.

A lot of the computer code for A.I. is published on sites like Arxiv.org, a repository of academic and corporate research. So, many policy experts believe that if the United States restricts the export of A.I. products and services, it will have little effect on the progress of A.I. in China and other countries.

“The core of these technologies is international and freely available,” said Mr. Edelman, who was a special assistant for economic and technology policy under President Barack Obama. “No country — the U.S. or China — has a monopoly on that.”

Federal regulations exempt publicly available information from export control. That means that the government is unlikely to bar companies and universities from publishing fundamental A.I. research. But it could establish controls that restrict foreign access to that information, said Greg Jaeger, a lawyer at the law firm Stroock & Stroock & Lavan who deals with export controls.

The Commerce Department could also restrict the export of cloud-computing technology and computer chips related to artificial intelligence. The export restrictions memo mentions both.

Amazon and Microsoft already operate cloud computing businesses in China through local partners, and Google has long hoped to do the same thing. Amazon, Google and Microsoft declined to comment.

Overly restrictive rules that prevent foreign nationals from working on certain technologies in the United States could also push researchers and companies into other countries.

“It might be easier for people to just do this stuff in Europe,” said Jason Waite, a lawyer with the firm Alston & Bird who specializes in international trade.

Chase Miller is the lead editor for Valley Ppost Express. Chase has written for several online publications including the Huffington Post, Vanity Fair and Bleacher Report. Chase is based in Los Angeles and covers issues affecting California. When he’s not busy writing, Chase enjoys traveling and hiking.

Silicon Valley pledged to break up the boys’ club of investing in 2018. How did it do?

Can Silicon Valley Learn to Stop Worrying and Love the Pentagon?

ConsenSys, a once promising blockchain venture firm, trims 13% of its staff as it teeters on brink of collapse